Selecting a vent fan for your bathroom can be a bit tricky. The device itself is rather simplistic, but there are many options available today. It helps to understand the basic functions, or features and explore some of the advanced features that may have you jump up a bit in cost. 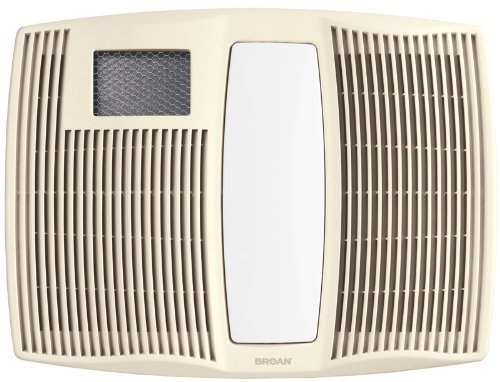 Vent fans for use in a typical home range from $15 to $450. While that covers the gamut of what you’d find at say Home Depot or Lowe’s, a more median range for a quality fan ranges from $75 to $200.

Depending on how your bathroom is situated, you could go the DIY route to save on professional installation. That could run as little as $200, and could go as high as $500 if the installation is done by a certified HVAC contractor.

The Need For A Vent Fan

Bathroom vent fans exist to reduce excess moisture and odors from a room that regularly has both. Removing unpleasant odors, as quickly as possible, is the popular conception. But the bathroom is also a place where steamy showers and baths can lead to moisture build up.

If you have insufficient ventilation, this can lead to moisture stains on walls and ceilings, peeling paint or wallpaper, frost on windows and even corrosion of metal fixtures. Worst case, mold develops and makes for unhealthy living.

The mere presence of a fan is of course not enough, as the air has to be moved to some other location. Poor installation will exhaust the air to spaces that are still in the home. This may seem especially convenient in a bathroom that is on a lower level.

Instead of leaving the moisture in a room that’s visible, it may seem easier to just get it out of sight and into ceiling joists or some other dark crevice.

Suffice it to say, this is very bad practice as the conditions for mold have actually increased. Instead, you’ll always want to have ducts move that air out of the house, likely through a roof vent.

Common manufacturers include Panasonic, Air King, Broan/NuTone and Delta. It’s likely one of these will have an affordable, good quality device that will match your needs. Though it helps to understand the basics and additional features.

Ideally, a fan is quiet and excels in quickly discharging the unwanted air. Quiet though can be relative and subjective to each individual. Therefore, the industry uses the term sones to quantify how quite a fan is when operating. This is a scale that goes from 0 to 4.0 or higher (most noisy), often utilizing decimals to the tenths for conveying degree of loudness.

In choosing a model, you’ll ideally want anything that is under 1.0, and up to 1.5 is still very good. The median and still fairly quiet is in range of 1.5 to 2.0. After that, noise is noticeable. Really, anything above 4.0 is a product that is considerably loud.

At the same time, to operate with enough energy to truly remove air quickly, it might be noisy. It doesn’t have to be, but there is sometimes a trade off especially when considering an economical model. Air flow capacity is the second most basic function of a vent, and often the one that most determines price.

This is quantified under the acronym of cfm, which stands for cubic feet per minute. The science on this says your fan ought to have 1 cfm for every square foot of floor space in your bathroom. The higher the cfm, the more powerful the motor is in removing air quickly.

Yet, in listings of bathroom vents, you’ll see terms such as “max room size” to help indicate if that is a fan for you to consider. In other words, knowing the dimensions of your bathroom, along with fixtures that run water will go a long way in determining which product’s cfm is most appropriate for your bathroom.

Pricing Options from High to Low

Now, that you understand the basics, let’s take a look at 3 devices in terms of sones and cfm. For this article, I am selecting among 3 different vents to help you zero in onto the right fan based on your price range. My intention is to go with one high priced, one medium, and the lowest price I could find.

Note that the listings actually include cfm routinely as way to determine the model. Such that the Panasonic Whispering Ceiling is more of a line within the brand where you can purchase various cfm options, but still maintain the extremely low sone level.

Below you can see more detail on pros and cons of each option as it relates to the price and quality:

The QTX series is actually a line within the NuTone brand. Just by glancing at the above, it would seem the Panasonic model would be the far better choice, given that it is nearly $200 less, is quieter and costs the same. The thing is, the QTX Series has more bells and whistles, including a light and nightlight, heater element, and has a recessed mounting style. Incidentally, both these products carry a 3 year warranty which is about average. 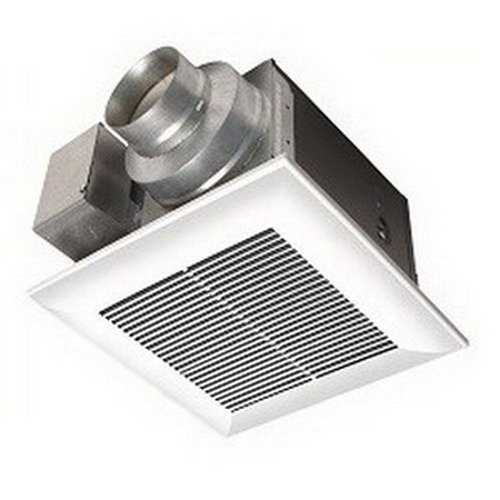 The NuTone 696N is perhaps the least expensive vent on the market today, so it’s clear advantage is price. And for a tiny bathroom (up to 60 sq.ft.), it may be a decent choice. But its disadvantage is clearly its relatively high noise level.

Bells and Whistles – Other Features to Consider:

Let’s look at the additional features and options available today in bathroom vents. First, let’s cover more of the basic features that aren’t quite as fundamental as sones and cfm.

Duct compatibility is a basic consideration. If you’re replacing an existing fan, then you’ll already have ducts in place and you’ll either want to match those or purchase a separate connector to match your existing size.

Warranty and Return factors are an important consideration. The average is 3 to 5 years for a quality vent. You can expect just a 1 year warranty on an economical device. And anything over 5 years is atypical, and often limited in what it actually covers. Almost every vent distributor will allow between 30 and 90 days for returns on their products.

Certifications and Listings convey if it is rated for basic safety (UL and CSA standard), within the standards of the industry’s primary certifier (HVI), and whether it qualifies as energy efficient (Energy Star).

Mount location specifies if it is ceiling or wall mounted. The vast majority are ceiling mounted.

Now for some of the more advanced items:

Lighting – this may seem basic, but this is not really necessary for the primary function of a fan. The type of bulb is always cited when this feature is noted. A night light is additional feature which means a second bulb that is less power and dimmer.

Heater – since your vent sucks air out, during colder weather a heater might be an item you want in your bathroom which some vent fans will include.

Motion Sensing is for those times in your house when you or a house guest forgets to activate the unit. This detects movement and will run, via an integrated timer, from 5 to 60 minutes until there is no more movement near the unit.

Humidity Sensing – this operates similar to motion sensing but its detection is based on rapid increase in air moisture or humidity. Often accompanied with an automatic turn off feature.

Speaker – who doesn’t like to listen to music while in the shower or tub? If you are one who does, this added feature is right up your alley. Bluetooth compatibility.

This site uses Akismet to reduce spam. Learn how your comment data is processed.